Here is a quick summary of the first couple chapters

Gandalf the wizard visits the hobbit Bilbo Baggins and invites him to join in an adventure. Bilbo declines, reluctant to leave the safety and comfort of his home. The next day, he is visited by dwarves who believe Bilbo can be of use to them in their journey to the Lonely Mountain to reclaim their ancestral treasure, now in the possession of, Smaug the dragon. Chapters 2 through 10 depict Bilbo, Gandalf, and the dwarves traveling out of the hobbit-lands toward the Lonely Mountain far to the east. As the landscape becomes less hospitable and the group faces hunger, bad weather, and attacks from creatures, Bilbo often thinks fondly of home and questions his decision to come on this journey. In the Lone-lands, the travelers encounter trolls who take the dwarves and tie them up in sacks, planning to roast and eat them later. They are rescued by Gandalf and Bilbo, who produces a key he found nearby. The key unlocks the trolls' secret cave, where the travelers find gold and weapons, to which they help themselves. They travel on to the valley of Rivendell at the edge of the Wild, and stay at the home of Elrond, a hospitable elf leader. Elrond translates the runes on the swords that Gandalf and Thorin Oakenshield, king of the dwarves, took from the trolls' cave; they are ancient swords called Orcrist and Glamdring that come from the Goblin-wars. When Bilbo regains consciousness and tries to make his way out of the cave, he finds a ring that he puts in his pocket. This incident, in Chapter 5, marks a dramatic moment in his adventures, for the ring confers powers of invisibility on whomever wears it. Bilbo encounters old Gollum, a slimy, murderous creature who kills and eats Goblins and others who stray into the cave. They exchange riddles, and Gollum discovers that Bilbo has the ring, which is Gollum's favorite possession. At the same time, Bilbo puts on the ring and discovers its magical power.The invisible Bilbo, Gollum has to show him the way out of the cave. Bilbo has the opportunity to kill Gollum, but decides his invisibility is an unfair advantage instead, leaps over his head through the mouth of the cave.

Here's is a image of Bilbo Baggins: 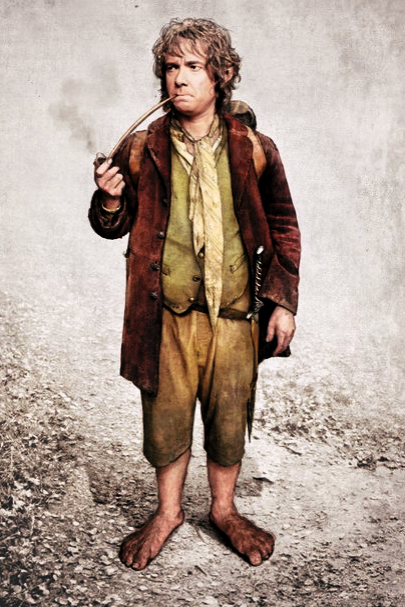 My opinion on the book is that the book is definitely a great read and I strongly recommend it if you're in to more of an adventure type book, I think that some of the battles are really cool because they descibe the battles in great detail. Gandolf is for sure my favroite character because he is a mage that helps Bilbo in his journey. I really like how the book tells you what the characters look and how they do things which I find very important.

The names of the crew that Bilbo is in:

To be cool and learn more about the Hobbit book Click Here!